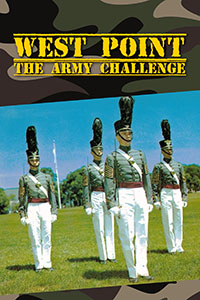 In the late 1960’s the United States Military Academy at West Point faced growing problems with enrollment, as increasing discontent over the Vietnam War drove a parallel decrease in applications. With fewer of the best and brightest interested in military service, the Army risked being deprived of the talented young men that its officer corps needed. Produced in 1968, “West Point: The Army Challenge” was a recruitment film meant to correct the academy’s reputation as a place where “they lock you in for four years”. Emphasizing the school’s modern liberal arts curriculum – one every bit as good as that of a civilian university - the film follows the journey of a young cadet from admission to graduation, demonstrating the career and life benefits for young men who accept the challenge of West Point.