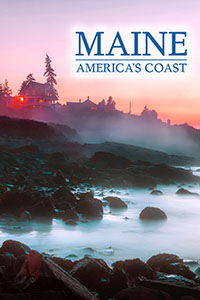 If one were to unpack its jagged, irregular shoreline – straighten out all the islands and inlets, all the peninsulas, bays and harbors – the Maine coast would stretch out over three thousand miles, longer than that of California or Texas. And while the Maine coast may seem distant from the rest of America, it is on these craggy shorelines where America truly began. Join former NBC News correspondent and A&E “Biography” host Jack Perkins for a guided tour of this remarkable place called coastal Maine. Rugged and raw, it has inspired the creative genius of a nation - poets, painters, and ponderers. And still today it is this coast to which millions of Americans turn to for recreation and re-creation. It may border the state of Maine, but this is truly America’s Coast.