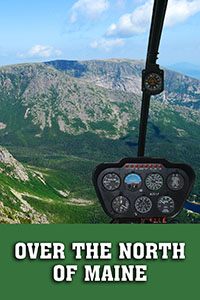 Over the North of Maine

Though often neglected in favor of the world famous sights of the coast, the northern regions of Maine are nonetheless places of spectacular and untamed beauty. It is here that one can find some of the most remote land in the continental United States, where human settlements are given numbers instead of names, and where populations number in the dozens or less. The scenery is gorgeous, but inaccessible to all but the heartiest explorers willing to venture down dirt logging roads or hike up steep trails – until now. Using helicopter-mounted cameras, “Over the North of Maine” gives you a bird’s-eye view of the state’s northern reaches, and for the first time you too can savor the many sights of northern Maine without leaving the comfort of your home. From vast forests and imposing mountains to the crystal clear lakes, ponds and rivers that crisscross the landscape, this is Maine as only a handful of lucky few have seen it until now.